Sixteen-year-old Basia Kohn (now Betty Rich) escapes the invasion of her small hometown and, crossing the border into Soviet-occupied Poland, she begins a journey that takes her thousands of kilometres from a forced labour camp in subarctic Russia to subtropical Soviet Georgia. Always optimistic and ready to take on new adventures as she struggles to survive in exile without family, Rich’s memoir, Little Girl Lost, is a “montage of graphic snapshots and moments in motion….” Wherever she finds herself, whatever she has lost, Betty is determined to survive on her own terms. 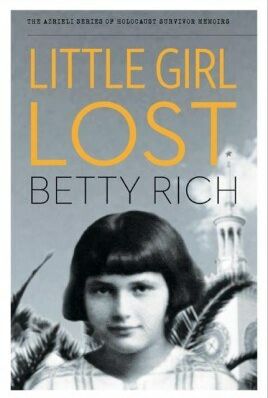 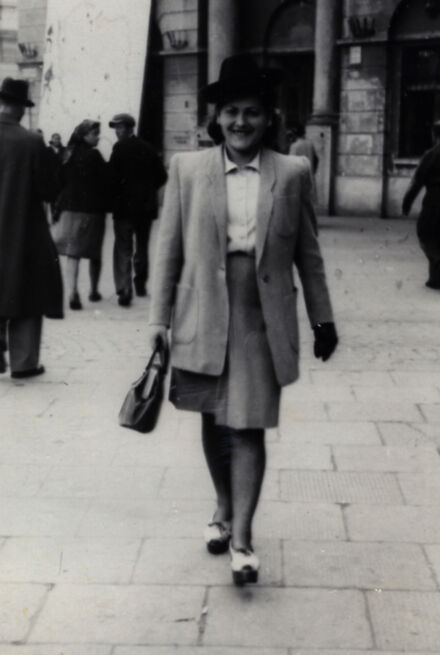 I packed a knapsack, as I had on my journey out of Poland, but now I was on my way back. This time, though, my knapsack was larger and nicer. I also took a suitcase small enough to drag along with me since I had some nice clothes that were precious cargo. I was lucky to be travelling with Joseph – in times of hardship, it is nice to have a good companion and he was good to me.

By this time it was late March 1945 and spring was approaching. The trip wasn’t as bad as we had anticipated; maybe it was because I was getting used to all kinds of adventures. This time we at least had enough money to buy food, no matter how expensive it was. This hadn’t been the case when I was travelling south to Georgia from Arkhangelsk. Now, although we slept on railway station benches, we had some blankets with us to make them a little softer, and to our great surprise we were always able to find seats on the trains. We even managed to stop a few times in small towns and find a local public bathhouse to wash up. The only terrible encounters we had were with groups of men who had left labour camps and were also trying to get back to Poland. They were like walking ghosts, human skeletons. Big, staring eyes, tautly drawn skin, faces full of fear. We tried to talk to them and they barely answered; they only mumbled in Polish or Yiddish.

At first, I couldn’t understand why those people hadn’t been taken care of, as my group had been. We asked them where they had been and eventually pieced together the information that they had been sent to extremely hard labour camps, where very few had survived. I had been lucky to be in Arkhangelsk. We also saw some Soviet citizens who had survived labour camps, but we couldn’t understand them very well. They all seemed too dazed and bewildered to communicate; we couldn’t figure out why they had been freed or where they were going. The sight of them remained engraved in my memory for a long time.

We came across some Jewish people and started hearing rumours about what had happened to the Jews during the war, but I wasn’t yet prepared to listen to what they were saying. I closed my mind. I tried to postpone the encounter as long as possible. For the rest of the trip, the few days it took to reach Lodz, the two of us were very quiet, each buried under the weight of our inner fears, almost embarrassed to face each other so as not to show the agony we felt. My thoughts were so mixed up, jumping from one member of my family to the next. The years I had spent away had been completely erased. All I could think was, what if? Suddenly, I didn’t want to go home. If only I could use some magic trick and disappear, or become somebody else. I was torturing myself to the point that Joseph later told me that he thought I had lost my mind.

When we finally arrived in Lodz, I was so mentally exhausted that I really was afraid that I was having a breakdown. “I can’t do it now, but I went through so much, how can I give in now? I must stop this; I must go on.” I kept talking to myself and poor Joseph didn’t know what to do with me. Somehow I got a hold of myself – after all, I was a survivor.

Lodz had been liberated some time ago – it had taken the Red Army a few months to march from there to Berlin – so we did encounter some Jewish survivors in the streets, a group of young people who looked so normal compared to those we had seen on the train. We couldn’t figure them out at all. We told them we had come back from the Soviet Union and asked if they would tell us where to go, what to do. They gave us all the necessary directions as to where to go first – to the Jewish Committee, where we could get assistance in various social services. We walked into a room in a building located on a main street of Lodz, which was buzzing with people and had lists posted on the walls. There was a whole army of people to help us, speaking almost every language, but I looked around and felt like a trapped animal. This was it. This was the end of the road. I understood that the fate of my family was posted on the long lists that covered all the walls. The Jewish Committee had made the task of searching easier by listing only the names of survivors.

At this point, we still didn’t know anything. I walked away from Joseph. I didn’t want him to be near me when I learned about my family. I needed to pull together all the inner strength I had and force myself to walk toward the lists, to look under the letter K. I was shaking. I didn’t see anybody around me. I was all alone, alone with my pain. My eyes moved down the list of Ks. I stopped at the end, closed my eyes for a minute and started all over again. Maybe I had missed our name…. The letters became very hazy. My head was spinning. Neither of my parents nor any of my brothers’ names were there – could it be that they didn’t have all the survivors’ names yet? It’s only the beginning, I told myself. They might still show up. Somebody had to have survived. My two parents. My four brothers. In my great shock, I forgot that my sister’s name wasn’t Kohn – her husband’s name was Laziczak. I quickly looked under L. There she was! She was alive! I was overjoyed to see that she had survived, but what about the rest? Was she the only survivor? I looked at Joseph, pale and shaken. He leaned against the wall and announced in a faint voice, “No one from my people is on the wall.”

Betty Rich was born Basia Kohn in Zduńska Wola, Poland, on June 10, 1923. After the war, Betty lived in Lodz, where she married her husband, David Recht. They fled the Polish Communist regime in January 1949 and arrived in Toronto later that year. Betty worked in mortgages and investments until her retirement. Betty Rich passed away in 2017.

The more we felt the Germans’ heavy boots in our lives, the more I knew that I had to leave... but I was scared. Where was I going to go? What would I live on?