At Great Risk: Memoirs of Rescue during the Holocaust

In France, underground networks find refuge for eleven-year-old Eva Lang and her younger sisters, protecting them from internment camps. In an orphanage in Slovakia, a pastor shelters young David Korn and his older brother, saving them from deportation. In a village in Poland, a farmer hides nine-year-old Fishel Philip Goldig and his parents after they escape from a ghetto and certain death. When so many people stood by during the anti-Jewish atrocities of the Holocaust, others risked their lives to save their Jewish friends and neighbours, and often even strangers. The three feature memoirs in At Great Risk are accompanied by excerpted stories of rescue by thirteen previously published Azrieli Foundation authors, highlighting the diverse experiences of rescue during the Holocaust. Together, these stories emphasize not only the courage and moral strength of the rescuers but also the survivors’ remembrances of and gratitude to their rescuers after the war. 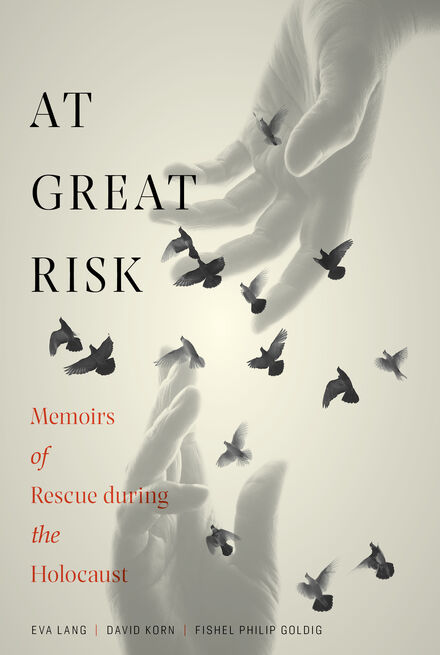 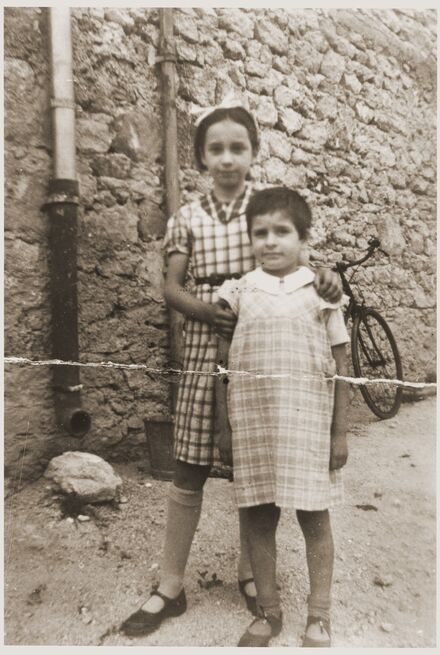 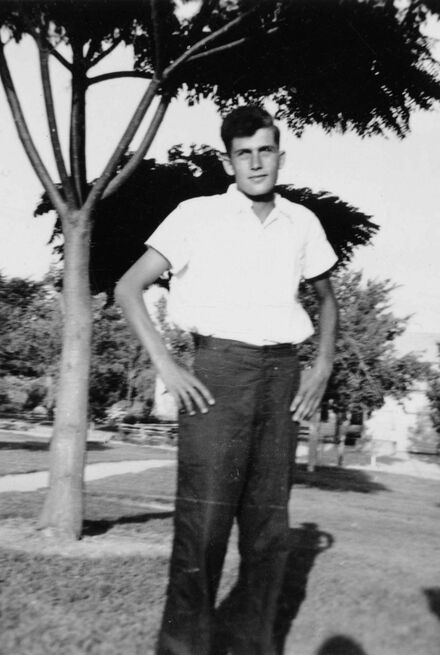 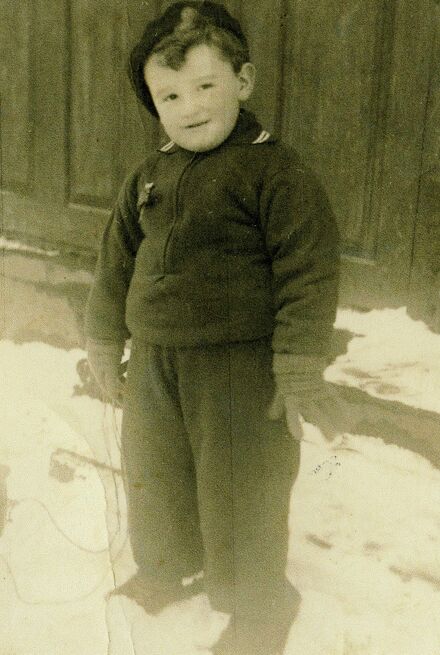 Three Stars in the Sky

The children’s homes were becoming targets of the Vichy authorities, so OSE (OEuvre de secours aux enfants) decided to try a more radical way to hide French Jewish children. They would change their identities. They would make the children accept that — although it was totally incomprehensible — they would have to become someone else until the end of the war. We were little girls, but we were expected to become grown-ups. We had to play a double game, to completely adopt this new personality and to act normal in spite of everything. The leaders of OSE made us promise never to reveal our true identities, and I never heard of anyone inadvertently revealing their real identity, even though there were little girls in our group who were barely five years old.

I wish I could meet the administrative geniuses who came up with the brilliant idea of hiding the Jewish children in the government’s own children’s homes run by the Entr’aide d’hiver du maréchal, the “Marshal’s Winter Mutual Aid Society!” Life in these homes was not necessarily simple, and after the war some of my friends told me that they had been very unhappy there. A certain number of children were not taken to these hiding places. Some girls were smuggled into Switzerland, some became domestics in private homes and others were sent to convents or farms. Thanks to a few good people, innocent children were saved from the Germans’ clutches.

One evening, Chief Cabri told me, “Starting tomorrow morning at dawn, your name will be Yvonne Drapier, and your sister’s, Raymonde Drapier. You’ll be part of a group of big sisters with little sisters under your protection. Here’s a short history of your family: Your father was born in Ménilmontant. He drank a lot and didn’t remember anything. He was inducted into the army and taken prisoner in Germany. No one knows where your mother is at the moment. She left you and your sister, and you were found in the streets and taken into the government children’s homes. Say nothing, absolutely nothing, unless somebody asks, and try not to attract notice.”

Saved by Luck and Devotion

We left Spišská Stará Ves in the middle of the night. We went to live on a farm in a nearby village. We would spend the whole day inside the farmer’s house, only allowed to go out during the dark evenings when we were sure we could not be seen by anyone who might betray us. After about a month, the farmer told my parents that it was too dangerous for him to hide us any longer; sheltering a Jew was punishable by death, and we had to leave.

But we had been extremely lucky to have left our town when we did. On May 26, 1942, all the remaining Jews from our town and the nearby villages were ordered by the local police to come to the synagogue. Men, woman, children and the elderly were rounded up and loaded on trains with the enthusiastic support of the Hlinka Guard. Their final destination was one of the Nazi death camps.

When we left the farm, my parents took us to the nearby town of Stará Ľubovňa, where my aunt Malka lived. She had married Joseph Taub, who was from there, in 1941, in a wedding ceremony I still remember so well, even though I was only four years old then.

Through the Taubs, who we stayed with for some time, we had a connection with the local Lutheran Evangelical priest, who was sym­pathetic to Jews. This priest issued my brother and me false identity documents that stated we had been born as gentiles in a village near Stará Ľubovňa: Jacob was given the name Kubo, and mine stated that my name was Šano Alexander. After receiving these documents, I remember walking past a sign in the entrance to a garden that read “Jews and dogs not allowed,” and saying, “Now we are allowed to en­ter the garden.” I was five years old.

Eventually, the priest from Stará Ľubovňa communicated with an orphanage that the Lutheran Evangelicals operated in Liptovský Svätý Mikuláš, a town about a hundred kilometres away. We arrived at the orphanage on October 2, 1942, and my parents asked the pas­tor, Vladimir Kuna, who managed the orphanage, to take in their two Jewish kids and keep them until the end of the war. They must have been thinking that if something happened to them and they did not make it, at least we, their children, would survive. Otherwise, all of us would perish. In hindsight, it must have been an agonizing decision for our parents to let their children be in a different place, separate from them. But the decision proved to be the smart one, the right one. My parents were very resourceful, and we were very lucky.

The Survival Story of a Six-Year-Old Boy

At first, we stayed in the attic of the farmer’s house. But this was very dangerous because the children, who at first did not know we were there, would occasionally go up to the attic to bring down some toys or play. Some of the neighbours’ kids often came to play, especially in winter, and if even one person had said anything about us being there, we’d all be dead. We had to find another place to hide.

The farmer’s yard extended back to a small hill, and, years before we arrived there, he had dug into that hill and constructed a cellar, which was like a cave, with walls and a ceiling made of stones. He stored his supply of potatoes there over the winter.

We thought that we could hide in this cave, but people were coming and going, buying the farmer’s potatoes, and the kids played near there as well, and we were afraid that the children would hear us. And so, in the middle of the night, my father, uncle and the farmer removed a few large stones at the base of the wall of the potato cave and dug further into the side of the hill to make another bunker for us to hide in. The opening of the cave was small and narrow, just wide enough for us to crawl through. We then made it wider, longer and higher to accommodate my parents, me, my aunt and uncle, and my three-year-old cousin Eva. When we were inside the cave, we would replace the stones, so that it could not be detected by anyone who might come inside the potato cellar.

The cave was not very high. When I stood up, I had to bend my head. It was warm and dark, and we had kerosene lanterns and some candles for light. There was a wire mesh over the window that was in the door to the cave, and so we also had some air. Kravchuk gave us a small table, blankets to put on the ground and to cover ourselves with, as well as some old clothing that had belonged to his children.

Once a day, early in the morning, Kravchuk would bring us some food and remove the waste. He would also bring us a big pitcher of water to wash with and for drinking. Once in a while he would spend some time talking to us. He was a nice, gentle man, though he and his wife were afraid of hiding us — they were often afraid to even come into our hole because they were worried neighbours would see them. There was always the fear of betrayal. 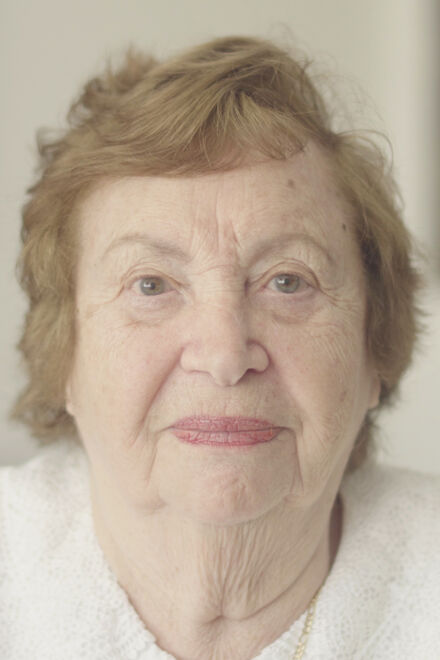 Eva Lang was born in Brussels, Belgium, in 1930. She immigrated to British Mandate Palestine in 1945 and to Canada in 1974. Eva was an early childhood educator and an aestheti­cian. She lives in Netanya, Israel, where she paints and is very involved in Holocaust education. 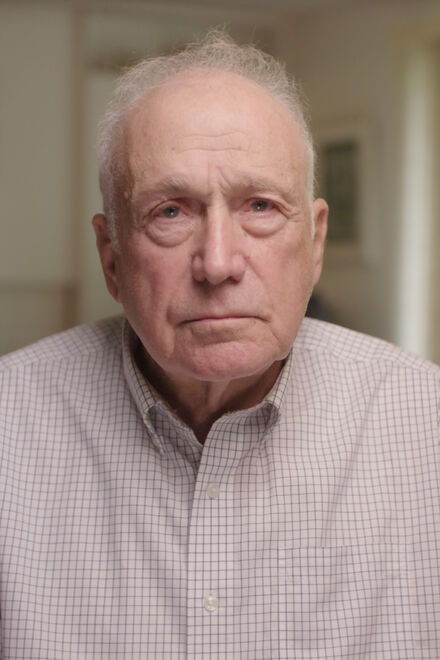 David Korn was born in Brno, Czechoslovakia (now Czech Republic), in 1937. In 1949, he immigrated to Israel, where he earned a degree in engineering. David came to Canada in 1965 and worked on building restorations in Montreal, Ottawa and Halifax. David lives in Halifax, where he speaks often about his wartime experiences. 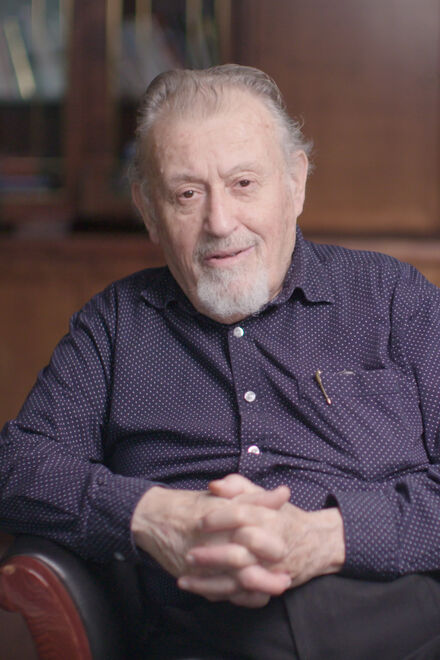 Fishel Philip Goldig was born in Mielnica, Poland (now Melnytsia-Podilska, Ukraine), in 1933. He immigrated to Montreal in 1948, where he estab­lished various businesses while also becoming a professional singer, cantor and theatre performer. Fishel lives in Montreal and is dedicated to Holocaust education.

Many rescuers often say they only did what any decent person would have done in their position, and yet we know that is not true. They did what so many others did not do.