Jacob Goldstein was born in Lodz, Poland, in 1928. Soon after Germany invaded Poland in 1939, Jacob and his family were forced into the Lodz ghetto with the rest of the Jewish population.

In August 1944, when the ghetto was liquidated, Jacob and his family were deported to Auschwitz-Birkenau. Jacob spent ten days in Auschwitz and was then sent to the Althammer subcamp of Auschwitz. In January 1945, when the Soviet army was approaching, Jacob was forced on a death march and was then put on a cattle car train to the Dora-Mittelbau concentration camp in Germany, where he had to do forced labour. Jacob was liberated by the Soviet army in May 1945. He returned to Poland and eventually made his way to the Landsberg displaced persons camp in Germany. In October 1946, Jacob boarded an illegal ship to Palestine, but the ship was intercepted by the British and its passengers were held in an internment camp in Cyprus for seven months. Jacob arrived in Palestine in 1947 and soon joined the Zionist military organization, the Haganah, and fought for an independent state of Israel. In 1952, Jacob immigrated to Canada and lived in Toronto, where he met his wife, Jeannie, and worked as a carpenter and builder.

In the Lodz Ghetto

Life became very scary in the beginning of September 1939. My uncle Felix was in the Polish army when the Germans took over Poland, which happened within weeks. Even before we were forced into the ghetto, which was in February 1940, we had to wear the yellow Jewish Star of David. There were some people who didn’t look Jewish who refused to wear the yellow star. Some even had the good luck of not being turned in.

Right away, the Germans started to humiliate religious Jews. Anyone with a beard was targeted immediately and forced to clean the streets and sidewalks. I saw this with my own eyes. They would also hit Jews with shovels. It was no secret what the Germans were doing to the Jews. The newspapers would publish stories about Jews who had been taken away. We hoped that things would settle down.

In Lodz, there were a number of Poles who were actually first- and second-generation Germans. They now felt powerful and participated in terrorizing the Jews.

In 1940, we moved in with my mother’s two sisters, who had already been living in the area where the ghetto was established. My younger aunt’s husband, Uncle Nathan, had been taken away because the Germans found out he had visited Czechoslovakia.

I didn’t really bring anything with me to the ghetto. What little we had accumulated, we brought. A lot of people traded and sold items in the ghetto. I went to school, and there was a library in the ghetto that I used to go to as well. I would take books out, and I’d read until it was night. I would forget about my hunger when I read. My younger brother, Yossi, used to comb the road looking for potatoes that had fallen off trucks. My mother, who had blond hair and didn’t look Jewish, once snuck out of the ghetto with me to try to get some food. When we were outside the ghetto, two people recognized us and shouted, “Jude, Jude!” (Jew! Jew!) We had to run away. We were lucky we escaped; otherwise, we probably would have been killed.

We were given a ration of food, burnt grains, but we were still hungry. I remember my mother soaking the grains in water for forty-eight hours and making a cake. We would eat this cake even though it was bitter; we ate it just to fill our stomachs.

When you are in such terror, you don’t have the luxury of thinking. All you think about is survival for that hour, for that day. You don’t plan things for tomorrow. There was never a time to sit and relax. It was all so unreal. You just waited for time to pass, hoping it would end soon. I had my bar mitzvah in the ghetto, just a simple reading from the Torah.

I recall that there was barbed wire surrounding the ghetto, along with German soldiers. If they felt like shooting, they would. I saw a lot of death in the ghetto. In the winter, people would carry the bodies on sleds. There weren’t only Polish Jews in the ghetto. The Germans brought in transports of people from Austria and Germany. We lived next to the police station. When we passed by, we could hear the screams — people were being tortured. The police took my uncle Felix in because someone had told them that he had some money or gold, but luckily they released him.

There were concerts with singers in the ghetto. The singers would sing in the street and the crowd would give them a few zlotys, Polish currency.

We got some news about what was happening outside of the ghetto. My uncle Felix had a built-in radio in the wall. If the Germans had found it, he would have been killed. He used to tell us what the Allies were doing. We knew about the deportations from the Warsaw ghetto.

In the ghetto, there was a man called Chaim Rumkowski who was head of the Jewish Council. He had been involved in Zionist politics before the war. In the ghetto, he gave the impression that he was “King of the Jews.” He kept telling everyone, “If we work and just follow what the Germans tell us to do, we will survive.”

Nobody throws in the towel if they are alive. You try to survive. I never came to a point where I wanted to give up. Things started to get really bad in June of 1944. We were told that we were going to be resettled to another place in Germany. We took it all with a grain of salt and with the hope that maybe things would be better.

Our family was lucky. We were in the ghetto until the end of August 1944, and until the day of the liquidation of the ghetto, we stayed intact as a family — except for my uncle Nathan.

Rumkowski’s police came in and began driving people out of the ghetto. In August 1944, my father, Uncle Felix and I had a meeting. We weren’t sure whether to leave the Lodz ghetto or hide. My uncle Felix had permission to stay in the ghetto to help clean up. I remember everyone agreeing that if we go, we all go together. Our family’s goal was just to stay together. We knew we had to do this to survive. But this was our downfall. Whoever remained to clean the ghetto survived. They had to endure many dangers, but they survived. The reason they survived is that the Soviet army started to advance and eventually liberated them. But when the Soviet army paused their advance, the Germans had the chance to move the rest of us. We were put onto trains. We didn’t know where we were going. It was three days on a train. It was hot. There was very little water. The stench was unbelievable. 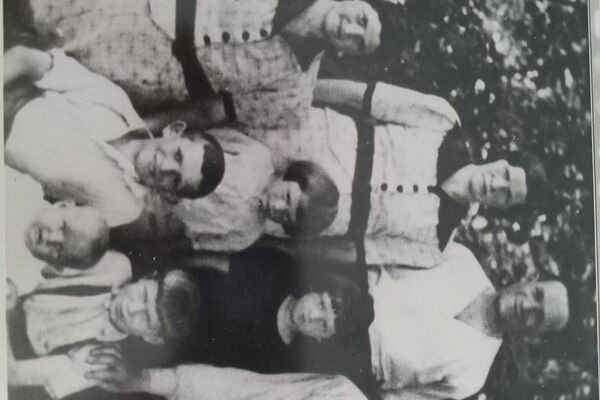 I went to the Landsberg displaced persons (DP) camp. It was there that I found myself in a school that was teaching people to be radio technicians. At this DP camp, shlichim, emissaries, came from British Mandate Palestine to talk to us about going there. This is also where I met my friend Walter Frankenstein.

It was Walter who told me about a boat that was leaving for Palestine. Walter and his wife had hidden in a basement in Berlin during the war, and he had delivered his two sons himself. He had also had the chutzpah to sneak out at night and go to the opera house. Walter was my musical mentor. He taught me to love opera, and I do to this day. He was the one organizing this journey to Palestine.

In October 1946, when we left, the French police gave us a loaf of French bread and some chocolate. We started out from a nearby fishing village on a ship called the Latrun. The ship got stuck at one point. It had 1,275 people on a boat that should have taken at the most five hundred people. They took the ballast out of the boat to make more room. You weren’t allowed on deck until after dark. I ate all my food right away and my friends thought I was crazy. The sea was very rough, and everyone started to throw up.

At the bottom of the boat, there was a group of Russian Jews. They sang from the beginning of the trip until we approached Haifa. When we came close to the island of Cyprus, four British boats appeared before us. As we got closer to Haifa, they started to come closer to our ship. Finally, when we entered the territorial waters of Palestine, the ships sandwiched us in and prevented us from coming ashore. The British had a quota system and restricted the number of Jews who were allowed to make aliyah, to immigrate, so we were turned away. We fought with everything we had as the British removed us from the boat, but to no avail.

The ships were transferred to Cyprus and we waited there, in an internment camp, for seven months. The camp had two fences around it. The outside fence had electricity running around the top to keep us in. I snuck under the first fence and, using the knowledge I had acquired at the radio school, I brought the electricity into our tent so that we could play a gramophone. There were mostly young people around me in the internment camp, and I remember learning how to dance. I was very fortunate to be around both Walter Frankenstein and Moshe Bacon in Cyprus. We attended many lectures on Judaism given to us by the shlichim. It was truly amazing to learn from these people.

After seven months, we were allowed to go to Palestine. We were taken to a place called Atlit. We were there for another month and then we were released. I eventually went to the kibbutz Ashdot Ya’akov in the Galilee. I was nineteen years old. I tried to learn Hebrew and I worked with members of the kibbutz. After about six months, somebody from the Haganah came up to me and asked if I wanted to join the army. I agreed.

I was in the Israel Defense Forces in the Golani Brigade from 1948 to late 1950. I had two stripes and ten soldiers who reported to me. For a brief time, there was an armistice agreement, then it was broken. I went to live in Haifa for about six months, and then I moved to Rehovot. After five and a half years, I finally left Israel. It was 1952. 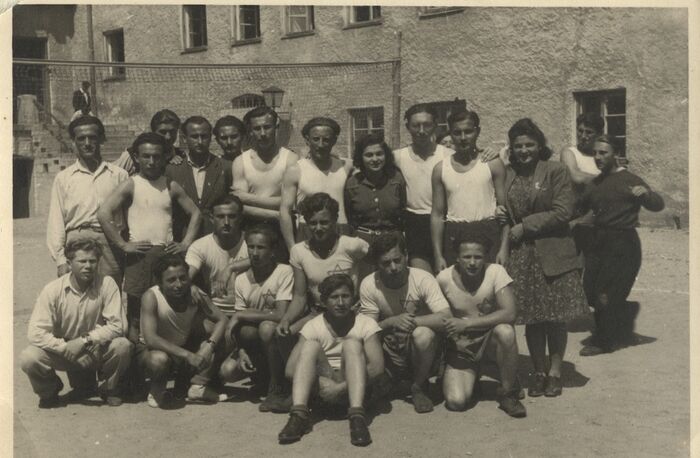 Jacob, front row on the left, in the Landsberg DP camp, circa 1945. 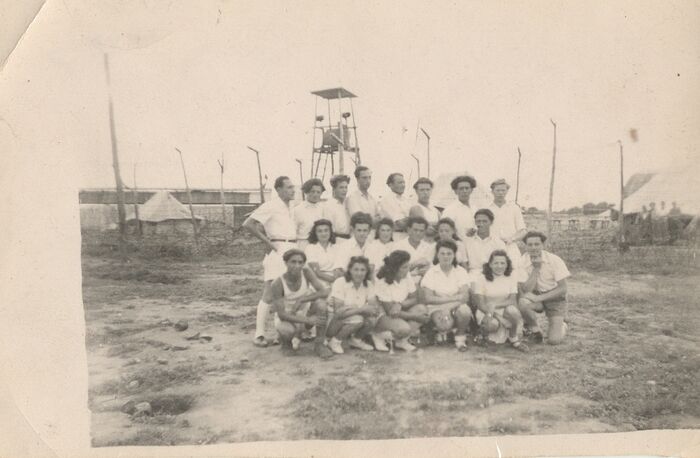 Jacob, in the back row at the right end, and his friend Walter Frankenstein, in the back row, fourth from the left. Cyprus detention camp, 1946.
Paula Goldhar All Survivors Joe Gottdenker