Howard (Chaim) Kleinberg was born in Wierzbnik, Poland, in 1925. At fourteen years old, he was forced into the Starachowice-Wierzbnik ghetto and two years later to a nearby forced labour camp, where he endured horrendous conditions, fighting illness and starvation.

In 1944, he was sent to Auschwitz-Birkenau, then to the Mauthausen concentration camp and then to a forced labour camp in Hannover. Howard survived a death march to the Bergen-Belsen concentration camp in the winter of 1945. There, he was left for dead until a young woman noticed him lying in the dirt close to death, moving only slightly, and saved his life. Howard immigrated to Toronto in 1947, where he reunited with and married Nancy (Nachama), the woman who had saved him years earlier. Howard and Nancy’s love story has been featured in various media, and he was very involved in Holocaust education. Howard Kleinberg passed away in 2020.

The Germans marched into Poland. Suddenly, we were told that we could not go on the street where Germans walked and had to wear armbands that labelled us as Jews. Gentiles could not be employed in Jewish stores. Things were happening so fast, with many restrictions quickly introduced into our daily lives. The Germans installed the Judenrat, the Jewish Council, as a tool to expedite their orders. The Jews who were members of the Judenrat had to establish an auxiliary force, which were referred to as police. The Judenrat had records of every household in the city, and every household had able bodies for labour. They came to every house; they were only interested in people under the age of forty-five. We saw this situation, and when we got a notice we assembled — we went to the factory with other Jews, worked a day and went home; there was no pay. After maybe a month or two, coupons were given for basic food to anyone who worked. The Germans reasoned that anyone who worked could live, and those who did not work did not need food. At age fourteen, I was the breadwinner of the family.

The system of reporting for work should have been fair, but corruption soon set in. Families who had money could buy off a member of the police force, and when he came to them for their sons, the sons did not have to go. They came to get me. Because of this, I had to work more; instead of going once, I would have to go twice or three times. This caused resentment, but we could do nothing about it. People who became part of the Judenrat or the police thought they would outlive everyone else. They had power and sometimes did even more than the Germans asked them to do.

The Germans wanted to make us aware that we were degraded. The work that they found for us to do, such as going into the river and dredging with a little shovel like a child’s toy, made us feel downtrodden. When winter came, they took us out onto the unpaved roads with little shovels to clean the snow off the roads. We were driven in open trucks, in winter, with snow or cold rain coming down. They would make us sing songs from the Torah, from the Bible. It was such a degrading, humiliating experience.

In the spring of 1940, the Germans established a ghetto. We knew that ghettos were being constructed across German-occupied Poland. Most cities in Poland were designed like those in many other European countries, with central squares surrounded by houses and stores. All the Jews from outlying areas were ushered into the nearest ghetto. The homes were small, designed to house families of three to four people, but now these houses had to accommodate three to four families. There was no choice and you had to make the best of it. This was the way we now had to live, still going to the factories but without the coupons. There was now a general distribution of food but it was meagre — not enough to live on, but not enough to starve.

In 1942, we started to hear rumours that the Germans had introduced liquidation. What did it mean? We heard that at places miles away from us, the Germans were ushering Jews into a central square and selecting able bodies for work, but in many cases, they would take the people to the trains and send them away. For the first time we started to hear the words Treblinka, Sobibor, Auschwitz. 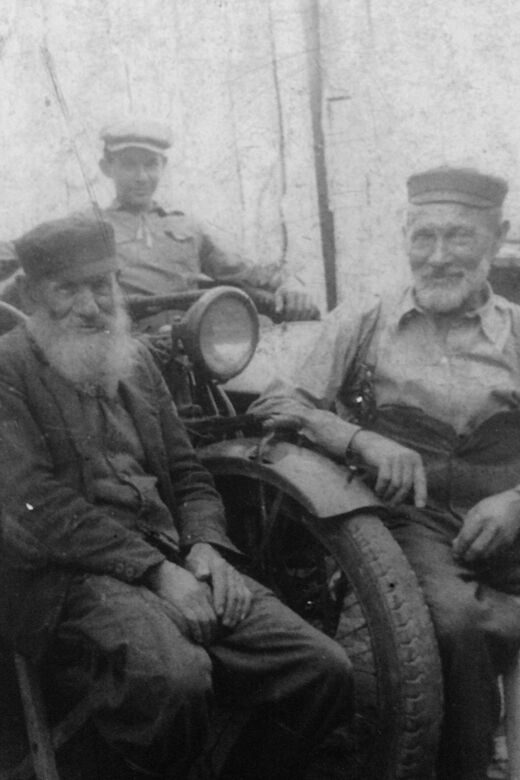 Howard (centre) with his grandfather, Schloime, and his father, Hershel. 1934. 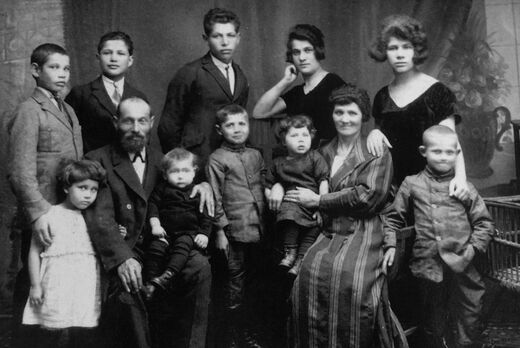 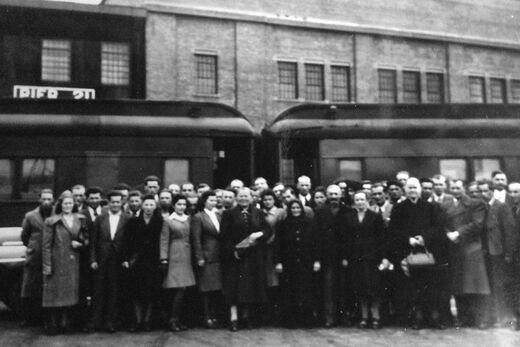 One of the first groups of Jewish Holocaust survivors to arrive in Canada at Pier 21. Halifax, May 1947.

I was lying on the ground; I have no idea for how long. I heard women’s voices, getting closer. Then I heard a girl’s voice saying, “He’s still alive, maybe we should save him.”

At the end of January 1945, we arrived in Hannover. There was a large steel factory there. We arrived at a camp that put fear into our hearts. There were no barracks, only cement buildings. We walked into a room where we saw Russian words on the walls that had been written in blood. There had been Russian workers there. They must have died. Looking at this was horrifying. Their conditions must have been terrible.

In the morning, we went to the factory. A number of Jews pulled a trolley on wheels. We soon found out what it was for – to bring back bodies. Workers were falling from hunger or from being beaten. The factory was huge, and the roof had been bombed out. Germans were working there, too. The painful part of this was that American planes were showing up every few hours, during the day, by the hundreds; the sky was dark with them. During the air raids, the SS stood at the entry to the shelter with large pieces of wood and beat us to get us down into the shelter. When the raid was over, we were beaten to get up out of the shelter. Those who were beaten badly enough became corpses for the trolley. This lasted until the end of March.

That spring, the Americans began to descend on Hannover. There was no time for the Germans to put us onto trains; there were no trains. The Germans marched us by roads and through fields. We didn’t know where we were going. The local populations knew that we were marching and put out large cisterns of water, but if you went to get a drink, you were shot. We were marching for a number of days and arrived at Bergen-Belsen concentration camp. It was different from any other camp — there was no work and no food. There was only death and the crematorium, nothing else. They dumped you there to die. As long as you were on your feet, hanging on, you were alive. If you gave up and couldn’t hang on anymore, you lay down in a huge field and joined the other thousands of dead bodies. I somehow hung on, with a few others. We were given blankets that we had to tie to a corpse; it was our job to then pull it to a pit. I did this for two weeks. On April 15, the British liberated the camp. But the liberation wasn’t so euphoric. We were liberated; that’s about all we knew. We knew that the Germans were gone. I had lasted as long as I could, but on the day of liberation I lay down to meet my maker; I could not go on anymore.

I was lying on the ground; I have no idea for how long. I heard women’s voices, getting closer. Then I heard a girl’s voice saying, “He’s still alive, maybe we should save him.” Another voice said, “Can’t you see he is dead? What are you going to do with him?” The girl said, “No, he is still alive, we are going to save him.” She had more determination and willingness to do something than the others.

When I opened my eyes, I found myself in a room. I have no idea how I got there. Bergen-Belsen consisted of multiple camps, with the men and women separated from each other. Women’s conditions were different from those for men. They had slightly better conditions. They didn’t have hair, they were skinny, but they were managing. Bergen-Belsen also had buildings where the Germans had lived. When the camp was liberated, the women ran toward this part of the camp and each grabbed a room. I found myself in one such room, where this young girl was there with her companions. She gave me her bunk. She fed me and washed me, but I didn’t take much food because I could not have digested it. Many survivors couldn’t take large quantities of food but did not realize it, and as a result many of them died. During the first week, I slept. At the end of the week, I saw this young girl near me. I asked her to get a doctor, but she said, “Where am I going to get you a doctor? I’m sorry I can’t get you a doctor, the war is still on.” (The war did not end until May 8.) I woke up the next day, and I noticed that the door was open and the main road was right outside. I saw that it was saturated with military vehicles. I crawled outside and lay down on the road. It didn’t take long before I was picked up and rushed to a military hospital, where I spent six months. I came out a human being.

Later, I returned to Bergen-Belsen to look for Nachama, the girl who had saved my life, but she was gone. 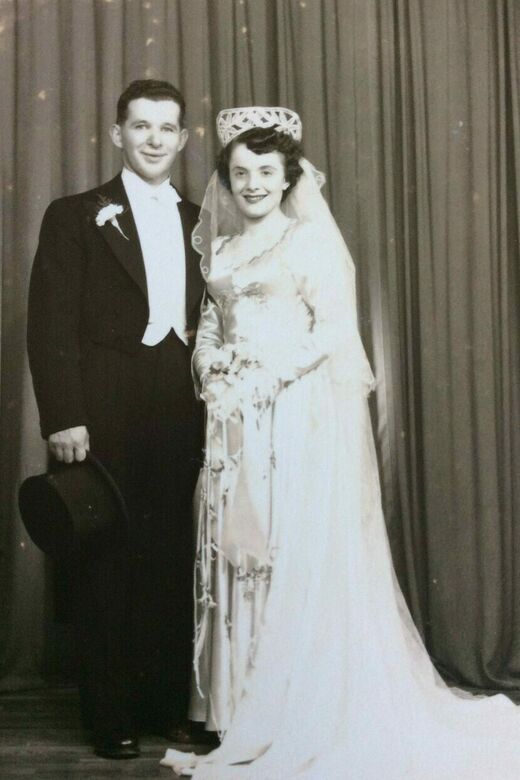 Howard and Nancy on their wedding day. March 1950. 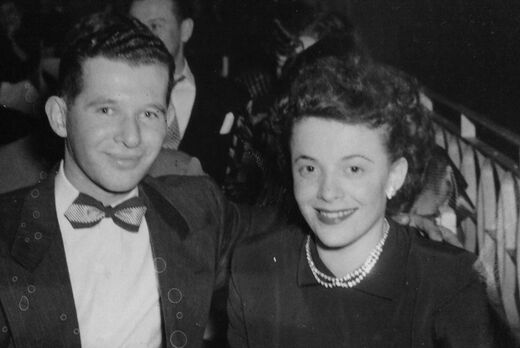 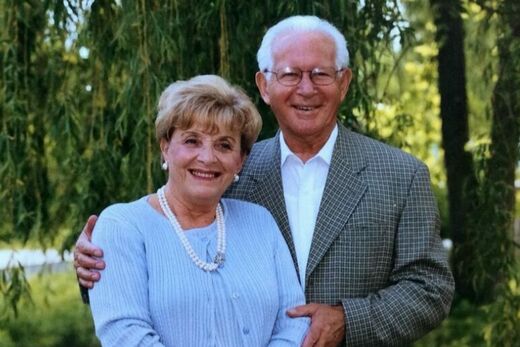