Shifra Knobel (née Nudelman) was born in the village of Lelów, Poland, in 1923. When Germany occupied Poland in 1939, the soldiers burned down part of Shifra’s village and destroyed many Jewish communities in the area.

Shifra and her family fled and spent the next three years moving around from place to place. They were in the city of Częstochowa, Poland, when the Nazis rounded up the Jews and deported many of them, including Shifra’s parents and most of her siblings, to the Treblinka death camp. Shifra and three of her siblings remained in the Częstochowa ghetto, where Shifra was forced to work in a kitchen and clean empty houses. In June 1943, Shifra was sent to work in the nearby HASAG-Pelcery munitions factory with some of the other surviving ghetto inhabitants. After her liberation in January 1945, Shifra and her sister made their way to Germany, where Shifra met her husband, Nechemia. In 1952, Shifra and her family moved to Toronto. Shifra Knobel passed away in 2022.

When we were young, we kids had chores to do around the house and there were no maids. We cleaned the house and helped our mother, as she was always in the store. We slept three to a bed. The kitchen was a big room with a bed in the corner. My parents slept in two beds; some children slept with Father and others with Mother. We had a sofa and somebody slept there, too. There was no bathtub, and on Thursday night my mother would heat up pots of water on the stove and then put three to four kids in a barrel and wash their bodies and hair. We washed the laundry on boards and then put it in iron pots to be cooked. In the winter, it was hung on lines and dried under the roof and it got stiff. In summer it got put outside. For Shabbos and holidays, everything got cleaned. There was a brush with a long handle to clean the floors, which were yellow and beautiful, with runners covering them. We had to walk carefully while they were being cleaned.

Before the Germans came, we all went to school. I was in Grade 7 in public school and never had a chance to finish. The boys went to cheder (religious school). When the war ended, I was not a good reader, but now I read books in English.

Everybody was happy. The kids would get together and play with little stones. In the street, we drew lines and numbers to play hopscotch. In summer we played outside all the time. We could come into the house and have a little piece of bread. We were happy in school and learned how to crochet and do needlepoint. I drew pictures, which were on the wall at school and hung up at home. We got stars if our work was nice; four stars was the best. It was very important to come to school clean. The teachers looked under your collar, and if it was not clean, you were sent home. Hair had to shine, ears had to be clean. We were checked before class started. I had shiny, black hair. Some kids had little lice and nits in their hair.

On Saturday, the Jewish kids didn’t go to school, but the non-Jewish kids did. On Sunday there was no school. I had a next-door neighbour who would give me notes from our classes on Saturday, and I would give her a piece of cake from Shabbos. She was so happy.

With sorrow, pain, hunger and in dirt — that is how we lived. After a while, we got used to not having much food and we were not hungry anymore. It is hard for me to talk about it. I cried every night. I still cry every night.

One day the kitchen was closed and we were sent to a munitions factory, HASAG-Pelcery. We had to live in the factory, where we were kept as prisoners. There were electric barbed-wire fences, and prison guards watched us so nobody could escape. A female guard was assigned to us, and she would give us each a cup of soup, some water and a piece of bread that was like mush. I couldn’t eat it. We went around crying and didn’t want to live.

We lived in a wooden bunker with bunk beds, one on top of the other. There was one blanket per bunk. Every evening, the light had to go out at a certain time. One day, on a weekend, the guard saw a light and shot at it. The bullet went up to the third-level bunk and into my sister’s shoulder. In the morning, my sister went to the hospital and a good Jewish doctor took care of her. She survived but suffered for the rest of her life because the bullet went in one side and came out the other. We could see the scars, and she suffered a lot.

With sorrow, pain, hunger and in dirt — that is how we lived. After a while, we got used to not having much food and we were not hungry anymore. It is hard for me to talk about it. I cried every night. I still cry every night.

I worked with boxes of shell casings that needed to be checked and numbered. We wore white gloves that got black from the metal. The bullet had to go into the shell and the point of the bullet had to be down. With the amount of work we had to do, people sometimes made mistakes. There was always somebody close by with a gun who would check to see if anything was wrong. Once a woman was put in a chair and given twenty-five lashes for making a mistake. I never got caught and don’t know how I never made a mistake. They shot people who made too many mistakes.

Some women would stay in the washroom just a little bit longer than they were supposed to and the guards would pull them out. The guards were sometimes worse than the Nazis; if people didn’t come back from the washroom quickly, they got twenty-five lashes until they bled. Some couldn’t take it and passed out; others died. I was so scared of everything, but not once did I face that punishment. How did I not get caught? I was like a little kitten, scared of everything all the time, so I never spent any extra time in the washroom.

Everybody tried to keep clean and rinsed their underwear a little bit. Nobody took anybody’s things while they were drying. During inspection, we had to hide everything. Somebody cut our hair with scissors. I don’t remember about my fingernails and toenails. It could be they didn’t grow. If we had water, we rinsed our mouths. There was nothing to brush my teeth with, and they weren’t in good condition by the time we were liberated. At the factory, there were washrooms with flushing toilets and that’s how we washed our faces. Most girls’ periods stopped, and all the girls talked about that. It took quite a while after I was released for it to start again. We asked ourselves if we would still be normal, with husbands and families. We worried about whether we’d be able to have kids and if they’d be normal. At night we sat and talked about what was going to happen to us and whether we’d ever be free. How would I live without my parents and siblings? We were afraid we wouldn’t be normal people and would be crazy. How could we live without anything? We think that we aren’t strong, but we are. But we were scared and expected to be put on a train.

Right to the end, we didn’t know that the Soviet army was near. On January 16, 1945, all of a sudden, somebody came running and said that the Soviets were coming. He told us that we were going to be served poisoned soup and the people who worked in the kitchen couldn’t say anything about it. At the last minute, I lost my two brothers because they were suddenly taken away. Somebody came back from one of the camps and told us the true story, that people were being sent to the ovens.

Finally, the Soviets came in. They opened the gates, and we didn’t know where to go or what to do. You wouldn’t believe how we clung to each other so that we wouldn’t be alone. And we were so hungry. Nobody had hurt me or my sister and I don’t know why. I wasn’t beautiful or smart, so how did I survive?

After the Soviets came, we didn’t want to stay in Poland anymore. We smuggled ourselves to Germany on a train. They let us in without a passport and we were supported by the UNRRA (United Nations Relief and Rehabilitation Administration). I was in Hecht, a German city, for a while. They fed us and gave us clothing, and people started to work. I met my husband, Nechemia Knobel, through the Borochov Centre, which had classes in Hebrew. I got married in Frankfurt when I was twenty-five. My husband was a tailor who was ten years older than me. He belonged to an organization that was a little bit to the left politically, but not communist. He read books — my house was filled with Yiddish books — and he gave lectures on Jewish life and Israel. All my children speak and write Yiddish, and even my daughter-in-law can understand it. One of my nieces teaches Yiddish.

We registered to come to Canada and waited. My sister went to Paris and met her husband there. I didn’t want to go there because I didn’t know the language and didn’t want to be a fifth wheel. My husband and I lived in a room for a while and started to work to save money to go to Canada. Our son was born in Germany.

I always tried not to pass my sorrow on to my kids until they were ready to understand. I told them my story when they were teenagers. I kept silent so that they could grow as normal people. Not all of their friends were children of Holocaust survivors.

There is no evening that I go to bed without thinking about my past and wondering, “How did this happen? How could it be like this?” And now we are at peace with the Germans. Europe is different now, and some feel guilty because it was their forefathers who committed these crimes. Yet there are still some Nazis. Yesterday there was an article in the newspaper about Nazis who want to destroy the Jews and say that there will be another Holocaust.

When my husband died ten years ago, I wondered how I would live without him. My daughter said, “I want you to stay here with me.” I went home by myself and said, “I have to face it on my own.” I cleaned up, shopped, lived for myself and said, “I have to do it.” I never thought I’d live to this age. I try not to let myself down, try not to think but to just do. When the baby cries, we have to take care of it. I never thought I’d be a grandmother, but now I have three children, nine grandchildren and eleven great-grandchildren. 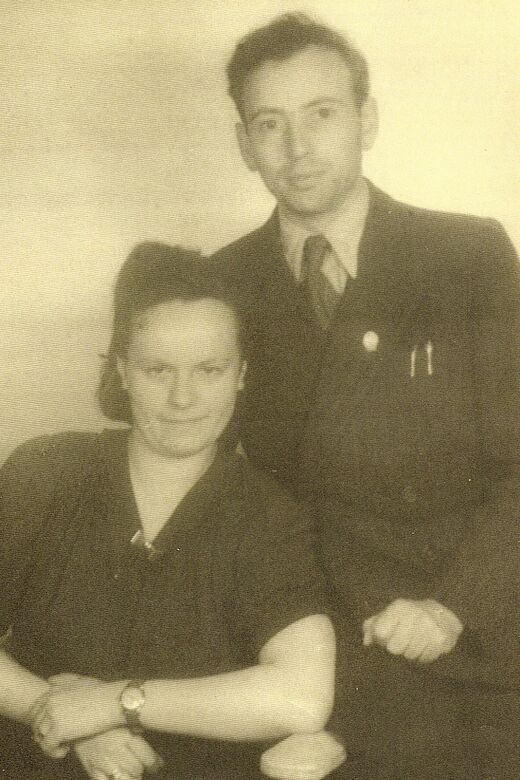 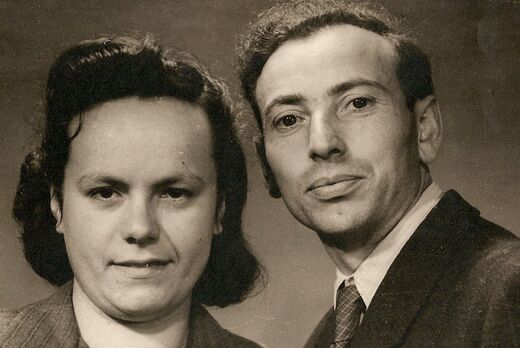 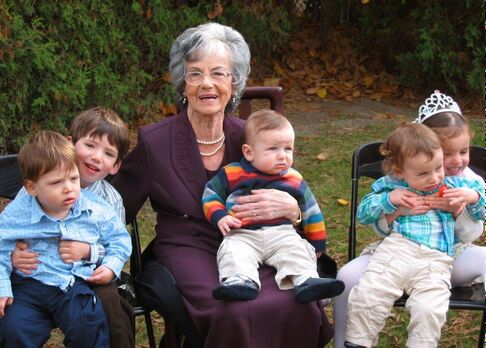 Shifra and five of her great-grandchildren. Toronto, 2003.